A pianist and composer who earned high acclaim for his fresh, improvisational style during the 1980s and 1990s will make his proud return to the concert stage for the first time in more than 15 years thanks in part to the efforts of Drake University students.

Poem to be Published

O, My Love is to be published in the Spring 2017 issue of Psychological Perspectives, “a beautiful journal whose mission is to promote greater consciousness by honoring and amplifying the psychology of C. G. Jung”.

High in the Mountains

From a work in progress for Soprano, Mezzo-Soprano, Tenor & Baritone soloists, Choir and Piano.

A collaboration with Vicky Stata, who is using some of Tom’s poems as inspiration for new paintings. This is the first. Prints and details available here. 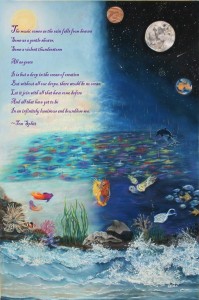 “The Dream of the Cosmos”

This piece, for which Tom wrote the poetry and music, was commissioned by Anne Baring and the CD included in her book published in the U.K. in April 2013. CD and download are available here.

Its concert premiere was given by the University of Denver Lamont Chorale, Catherine Sailer, conductor, on 8 November 2012, in the Newman Center for the Performing Arts, Denver, CO, and later recorded there.

This sung-through ‘operatic’ musical drama, set in 19th c. Sicily, is the story of a love triangle between a French poetess, a priest and a mafioso set against the backdrop of an old family curse. It was suggested by folklore and actual events. The piece was workshopped and presented in readings at ASCAP New York. Please contact for more information.

All recordings are now downloadable. Go to http://tom-splitt.com/shop/

“The Tree” poem is included in a new textbook offered by Belgian publisher VAN IN. The song is included on a companion CD along with tracks by Bruce Springsteen, Michelle Shocked and others.

The poem was chosen by students of New Albany [OH] Middle & High School and engraved on a plaque set at the base of a tree planted in front of the school to commemorate the fallen heroes of 9/11.

The poem is being used by the North Carolina Dept. of Education in its 2012 reading assessments.